Last year, I was a bit horrified when I realised how little Australian literature I had read. Of all the many, many books I’d read since I could, only a handful of them had been by Australian authors. As such, part of my mission to ‘read differently’ came to encompass the deliberate selection of Australian work. As a result, I’ve discovered some incredible pieces by Sonya Hartnett, Gillian Mears and Tim Winton, to name just a few.
My most recent discovery has been Carrie Tiffany , and her new novel Mateship with Birds (Pan Macmillan): 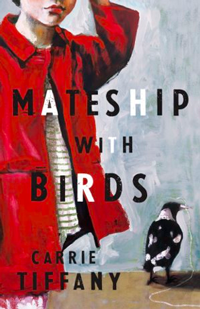 “On the outskirts of an Australian country town in the 1950s, a lonely farmer trains his binoculars on a family of kookaburras that roost in a tree near his house. Harry observes the kookaburras through a year of feast, famine, birth, death, war, romance and song. As Harry watches the birds, his next door neighbour has her own set of binoculars trained on him. Ardent, hard-working Betty has escaped to the country with her two fatherless children. Betty is pleased that her son, Michael, wants to spend time with the gentle farmer next door. But when Harry decides to teach Michael about the opposite sex, perilous boundaries are crossed.
Mateship with Birds is a novel about young lust and mature love. It is a hymn to the rhythm of country life – to vicious birds, virginal cows, adored dogs and ill-used sheep. On one small farm in a vast, ancient landscape, a collection of misfits question the nature of what a family can be.”
Part field notes, part journal and part narrative, this fascinating novel is one of the most interesting reads I’ve had so far this year.
Carrie’s writing style is unique, and incredibly readable. It is clipped, to the point and interestingly, written in the present tense. These characteristics give the story immediacy and an intimacy. On more than one occasion I was reminded of field observations, of animal husbandry or fittingly, of bird-watching notes such as those put on paper by Harry himself.
There is the most intense sense of watching, of both being watched and of observing others. At all times, I felt that I was privy to the inner lives of these fascinating characters. It took no time at all until I had started to move with the very distinct rhythm of this narrative, and to smile, wonder and cringe along with it’s protagonists:
“Shopping after work, Betty falls in the rain. Her heels slide out from under her on the wet timbers of the verandah in front of Oestler’s Fruit and Veg. She goes down heavy, face first; puts her tooth through her lip, bleeds a lot of orange sticky blood over her uniform…”
The story is primarily about Betty, her children Michael and Little Hazel, and their quiet neighbour Harry. These are the characters you want to know, they are endearing and each have compelling stories to tell. Then there are the secondary characters, such as Harry’s ex-wife and the despicable Mue. We’re given little information about these associate figures, but they undoubtably have a dark and severe effect on the protagonists of the story. It is through Mue that most of the deepest shocks of this story are delivered.
It is beautifully Australian, rural and reminiscent. The importance of the everyday, and of our immersion in and connection with nature are key themes.
Although there is a definite quietness about this story, it is at the same time quite shocking. This novel is filled with lust, little shocks of sex that jump out at you and then pass as quickly as they arrived. Often, they’re recollections of experiences of sexual function, curiosity, deviation, rather than the act itself. The sex-scenes that are included (there are a couple) are gritty, and real, and breathtaking.
Mateship with Birds certainly made me think, about new things, about these intriguing characters and about my own family. I’m hoping that some of you will join in and read the book as this month’s TBYL Book Club book, I’d love to hear what you think of it.
Buy your own copy of Mateship with Birds, at the TBYL Store!
You can visit the TBYL Store here
For more reviews visit Mandi’s blog, That Book You Like… here!
Reviewed by: Mandi Johnston, from That Book You Like…

Previous Article Getting My Happy On - Life After Panic Attacks
Next Article Lentil, Beetroot, and Goats Cheese Salad