The Voice coach Delta Goodrem left viewers disgusted after she put her filthy feet on display during the blind auditions last night.

While the 35 year old Aussie is usually praised for her style, this time Delta left viewers unimpressed after giving everyone a good look at her very dirty feet.

Twitter went into overdrive over her grubby soles with many urging her to keep her shoes on next time.

‘Wash them please.’
‘Can Delta Goodrem wash her feet before sticking them in a camera lens?’ one fan wrote on Twitter.

‘Delta Goodrem’s feet tho…’ another added, accompanied by a string of vomiting emojis.

While a third tweeted: ‘Maybe Delta Goodrem you should keep your feet on the ground.’

The foot display happened after the judges started to argue over contestant Nathan Issac. Nathan stunned the judges with his performance of the song You Spin Me Round (Like a Record) by ’80s band Dead or Alive.

Boy George was the first to turn his chair and said that being an 80’s pop icon himself he should have the right to ‘speak first’.

This didn’t sit well with coach Kelly Rowland who then went on to sit beside Delta, with the two bestie judges putting their bare feet on Delta’s button.

‘There’s some sort of weird foot fetish going on over here,’ George said. 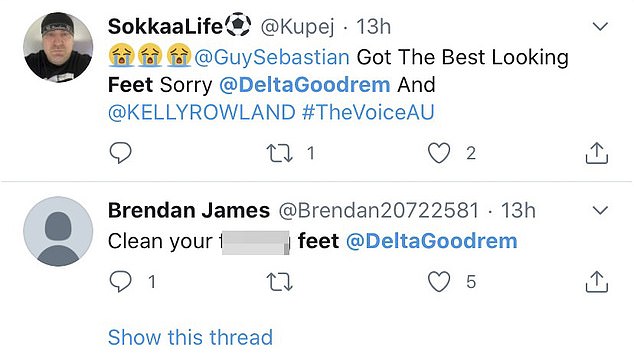 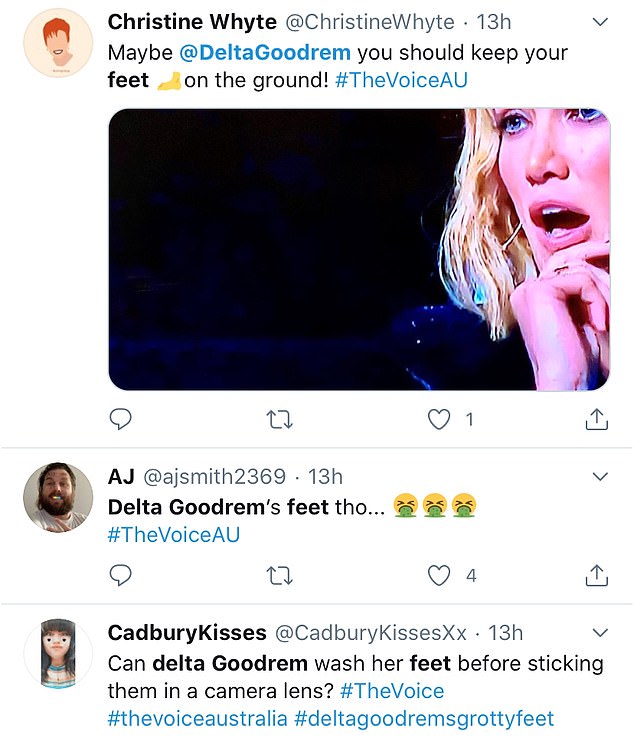 Despite their efforts and foot exposing, Nathan ended up choosing Boy George as his coach.

‘I called in support because I felt like this was going to be a strong battle up against George and this ’80s connection right now,’ Delta said.