If you’re a fan of The Real Housewives of New Jersey then you’ll know that Teresa Guidice and Caroline Manzo have had a huge falling out and are currently not speaking to one another. We won’t go into details of why and what happened to cause the rift but let’s just say there was a lot of yelling and finger pointing. So imagine our surprise when the two reality stars teased a clip of them sitting at the same table for an upcoming ad by Sabra Hummus for the Super Bowl.

The commercial which Teresa and Caroline filmed back in December, features nearly 20 celebrities including Mel B, Ric Flair and T-Pain all showing us how they ‘mmus.  During the ad, the Jersey girls recreate one of the most iconic Real Housewives moments ever- Teresa’s table flip in Season 1!

Estranged husband of Teresa, Joe Guidice showed his support for the ad hinting that he loved seeing his wife back together with her former friend. “I’m so proud of you both @teresagiudice and @carolinemanzo and everyone!” he wrote on Instagram yesterday.

I’m So Proud Of You both @teresagiudice And @carolinemanzo and everyone! The commercial had me doing the dip! I’m going out to find myself some hummus for my 🥕🥦🌶🥨. #sabra #superbowl was off the charts!!! #jlo #shakira 🏈☝️

Joe continued the love for Teresa by posting a photo of her with Sabra products in the background, he wrote, “Congratulations beautiful.”

Caroline Manzo’s son Chris also sent a lot of love to his mum by sharing a still of the ad on Twitter. 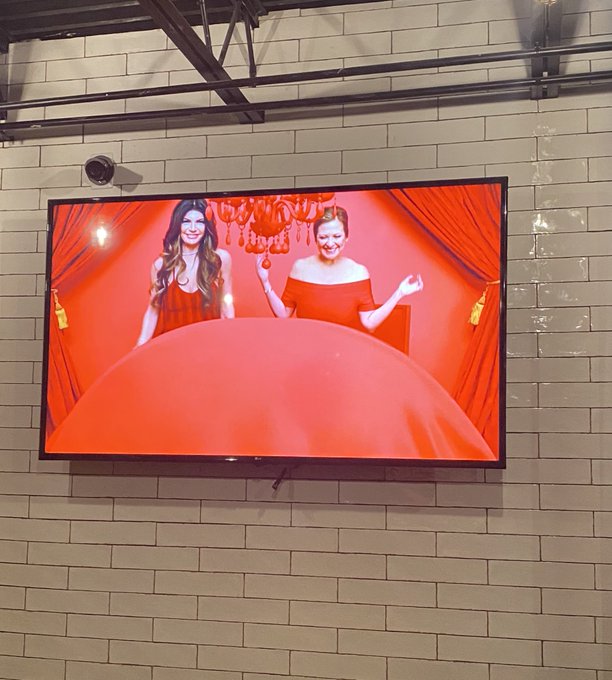 Let’s hope this mini reunion for hummus can help bring these two families together once and for all!
You can watch the full ad here.
Images: Instagram