Man of the week: Jonathan Lipnicki

How are you feeling right about now? Old? Thought so. Sorry bout that.
Photos: Ryan Caliendo
Mum of the week: Victoria Beckham

Harper Beckham watches on as her daddy David Beckham plays a Los Angeles Galaxy soccer match against Real Salt Lake at the Home Depot Center on Sunday (November 6) in California.
Proud mum Victoria Beckham, 37, doted on little Harper during the exciting game.
I just adore this little poppet. Look at her, she looks just like her mummy. Makes me all clucky…  NOT! (<- “Borat Not”, not a “Wayne’s World Not”, I’m not that uncool you know.)
Photos: SplashNewsOnline, Flynet Pictures
10: Gwen Stefani

Gwen Stefani glammed up for the 2011 MOCA Gala on Saturday (November 12) in Los Angeles.
I guess you could say she overdid it. She looks like a test pattern. Maybe if you look at her suit long enough you’ll see a pigeon or something. Let me know if you find anything, won’t you?
Credit: Jeff Vespa, Stefanie Keenan, John Shearer
9: Lady Gaga

Lady Gaga poses backstage at the 2011 Bambi Awards on Thursday (November 10) at the Rhein-Main-Hallen in Wiesbaden, Germany.
The 25-year-old entertainer, who wore an Alexander McQueen Spring 2012 gown, was presented with the Pop International Award from designer Karl Lagerfeld.
There’s not really a great deal to be said, is there? Pure Gaga, in all her zany glory. I do love seeing what she comes up with each time though.
Credit: Patrick Hoffmann, Christian Augustin; Photos: WENN, Getty
8: Brad Pitt & Angelina Jolie

Brad Pitt is accompanied by his partner Angelina Jolie at the Japanese premiere of Moneyball on Wednesday (November 9) in Tokyo, Japan.
Angelina Jolie wore an Atelier Versace dress. Brad donned a Carol Christian Poelle ensemble.
I really think he looks revolting. Really, he needs to have a shave and a haircut and probably a shower too. Ange, on the other hand, looks fabulous. Red really suits her.
Credit: Adam Pretty; Photos: Getty
7: Carrie Underwood

Carrie Underwood hits the red carpet at the 2011 CMA Awards on Wednesday (November 9) at Bridgestone Arena in Nashville, Tennessee.
The 28-year-old country star, rocking a gold sequin ombre cap sleeve gown by Reem Acra, co-hosted the live show with Brad Paisley. Carrie finished off her look with Jimmy Choo shoes and Johnathon Arndt jewels.
If you didn’t know who she was, you could easily identify her as a country music star, couldn’t you? She has the highly polished, sparkly-arkly look of a country singer.
Credit: Michael Loccisano; Photos: Getty
6: Gwyneth Paltrow

Gwyneth Paltrow hits the red carpet at the 2011 Bambi Awards on Thursday (November 10) at the Rhein-Main-Hallen in Wiesbaden, Germany.
The 39-year-old actress sparkled in an emerald green plunge-neck sequin gown with cap sleeves and a slim belt by Elie Saab.
I’m not sure I understand why this dress needed to have a plunging neckline. Wouldn’t it be much prettier with a simple rounded tshirt neckline or even a v necked mandarin collar? Why do designers (and celebs) think we want to see bony rib cages and wide set barely-there cleavage? It’s really not that attractive.
I do adore the rest of the dress though. The colour is amazing. And another little note to Gwynnie – next time, do something with your hair love.
Photos: Getty
5: Jennifer Lopez

Jennifer Lopez looks stunning on the red carpet of the Glamour 2011 Women of the Year Awards held at Carnegie Hall on Monday (November 7) in New York City.
The 42-year-old entertainer, who wore a Versace dress and clutch, Jimmy Choo shoes, and Harry Winston jewels, received the The All-Star award at the ceremony, which was presented to her by designer Donatella Versace.
I’m loving that she’s temporarily ditched the “WTF is that” stare and the harsh hair do’s for a softer look. She looks so much prettier when she’s not trying to look sexy. Her gorgeous gown is showing off her fabulous curves and she looks fantastic. Yay for J.Lo!
Credit: Mike Coppola; Photos: Getty, Justin Campbell
4: Michelle Williams

Michelle Williams shines on the red carpet at a special screening of her film My Week With Marilyn held at Grauman’s Chinese Theatre on Sunday (November 6) in Hollywood.
The 31-year-old actress looked stunning in an Oscar de la Renta dress and Jimmy Choo heels. She accessorized with a Salvatore Ferragamo bag and a Cartier ring.
Recently Michelle has revealed the reason she is keeping her cropped look is as a tribute to her late partner Heath Ledger. She noted that no one else seems to like it, including their daughter Matilda, but she continues to keep it because Heath loved it.  Awww : (
Credit: Jason Merritt, Kevin Winter; Photos: Getty
3: Sofia Vergara

Sofia Vergara sparkles as she arrives at the Latin Grammy Awards, held at the Mandalay Bay Resort & Casino on Thursday (November 10) in Las Vegas.
The 39-year-old Modern Family star stunned in an embroidered silver strapless gown by Reem Acra and her own K-Mart fine jewellery line.
This one was born for the red carpet, you can just tell she has been waiting for these moments for her whole life. She is so well put together, and YAY for all-natural curves!
Credit: Ethan Miller, Kevin Winter; Photos: Getty
2: Taylor Swift 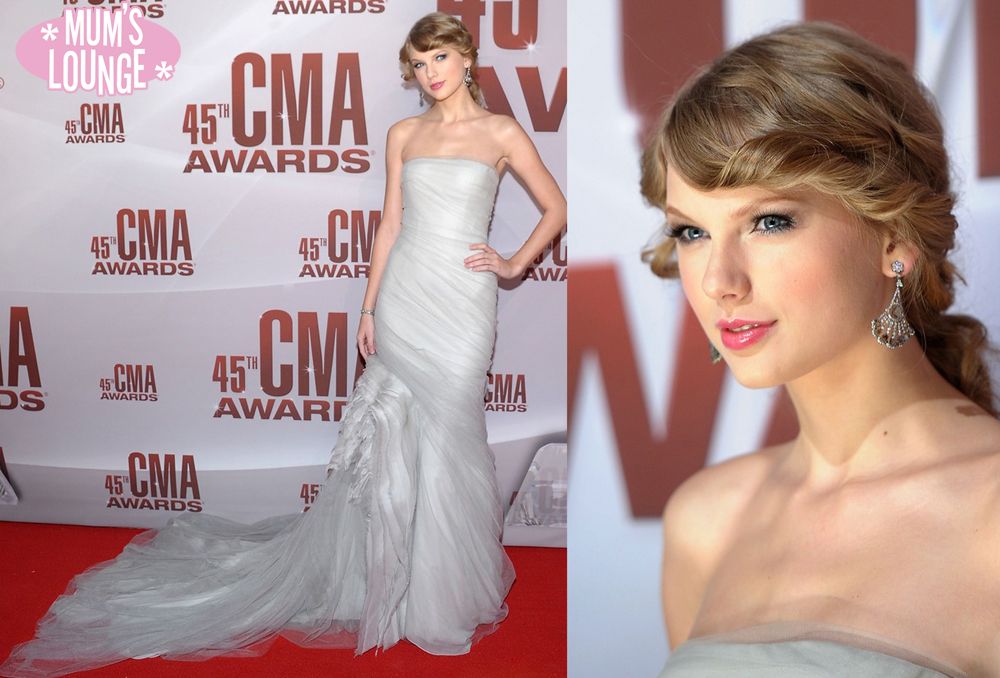 Jennifer Aniston wraps her arms around pal Chelsea Handler at the Glamour 2011 Women of the Year Awards held at Carnegie Hall on Monday (November 7) in New York City.
The 42-year-old actress is wearing a Versace dress, Celine shoes, and Fred Leighton jewels. Chelsea is wearing a horrid tight Stella McCartney jumpsuit.
Jennifer looks just as cute as a button. I love every single thing about her style this week. She looks incredible. And way betterer than Brad Pitt. Just sayin…
Credit: Dimitrios Kambouris, Mike Coppola; Photos: Getty
Jill Slater: Mums Lounge Fashion Correspondentwww.stuntgirls.com.au Check in weekly for your recommended dose of celebrity fashion as Jill casts a fashionista’s eye over the stars and shares whats hot to wear … and whats not to wear!