Oooh there are a few I’d wear among this week’s gallery of fashion, ladies!! And I’m not just talking about Chris Hemsworth either, although I’d gladly wear him as well. We have the latest looks from Julia Roberts, Jennifer Aniston and Hilary Swank as well as a handy slimming illusion from Olivia Wilde. As always, we want to know what YOU think! So add your opinion in the comments!

The 17 year old actress wore a black floral print gown with a full skirt and a low-cut bustier which she paired with a cute (and age-appropriate) denim jacket and platform heels.

The young star styled her peroxide blonde hair into a messy-chic side ponytail and highlighted her pretty blue eyes with winged eyeliner and lots of mascara.

I really like this. I would totally wear this if I were a 17 year old attending a big premiere. She pulls it off well, her hair and makeup is exceptional. (nb, had she been even 12 months older that jacket may not have been so cute)

Chris Hemsworth and Elsa Pataky are dressed to impress while attending the premiere of his latest film Rush held at Auditorium della Conciliazione on Saturday (September 14) in Rome, Italy.

The Aussie star of Thor and The Avengers suited up in a dark jacket and matching straight-leg trousers teamed with a blue shirt, dark tie and black shoes.

Love her makeup – those colours look amazing on her!

Felicity Jones is classy black while arriving at the premiere of her latest film The Invisible Woman during the 2013 Toronto International Film Festival held at The Elgin on Monday (September 9) in Toronto, Canada.

The 29-year-old English actress wore a Christian Dior black strapless fit-and-flare dress with a bustle at the rear which she styled simply with diamond earrings, black pumps and a Rauwolf gemstone clutch.

Barely there makeup – save for cat-eyes to accentuate her green eyes – and a slicked-back bun completed her movie star look.

Love love love this and would totally wear it myself.

The 39-year-old actress wore an olive-green frock with a sexy black-lace long-sleeved keyhole overlay from the Gucci Pre-Fall 2013 collection.

Gucci patent-leather T-strap pumps accented with a knotted bow detail and a black Gucci ‘Broadway’ clutch with a plexiglass and Swarovski jewel detail completed her look.

Jennifer Aniston and her fiance Justin Theroux (not pictured) attend the Life of Crime cocktail reception held during the 2013 Toronto International Film Festival on Saturday (September 14) at Hudson Kitchen in Toronto, Canada.

The 44-year-old actress is wearing a classic Vivienne Westwood dress with its signature corset and revealing neckline in powder blue.

She styled it with nude Westwood pumps and silver drop earrings.

I’m starting to feel like a real fashionista now. As soon as I laid eyes on this I knew it was a Vivienne Westwood. Gorgeous.

Oh Julia, what are you doing??

Okay, she’s stunning and looks exactly the same as she’s always done so well done there. But what is doing with that dress? I do adore those heels though.

Liane Balaban attended the premiere of her latest film The Grand Seduction during the 2013 Toronto International Film Festival at Roy Thomson Hall on Sunday (September 8 ) in Toronto, Canada.

Stunning dress on a stunning woman. Shame it’s a bit tight through the hips and bum area. Why couldn’t the flare have begun at the fullest part of her behind?

I dunno, it’s all a bit Adriana Xenides for me.

You definitely get the feeling that there are two people in these photos, don’t you?

Morena Baccarin hits the red carpet at the premiere screening of the third season of her hit Showtime series Homeland on Monday (September 9) at the Corcoran Gallery of Art in Washington, D.C.

The 34-year-old brunette beauty played up her growing shape in a Donna Karan frock featuring a deep V-neckline, strategic jersey draping and a slinky bodice that accentuated her pregnant shape beautifully.

Casadei shoes and Hearts on Fire jewellery completed her look.

I want to say something about that dress but I think it’s the only thing holding that baby in there so I’ll leave it well alone. She looks incredible.

The 29-year-old actress is wearing a geometric-print Antonio Berardi dress from the designer’s Resort 2014 collection which has a waist-nipping optical-illusion quality.

She kept the rest of her styling simple including black strappy Stuart Weitzman ‘Nudist’ sandals and a selection of gold bangles.

I need me a whole wardrobe in this design. People will wonder what sort of amazing diet I am on. As I sweep away glamorously, I’ll say “Antonio Berardi, dahhling. It’s fahhbulous”.

Taylor Swift arrived at the premiere of her latest flick One Chance during the 2013 Toronto International Film Festival held at Winter Garden Theatre on Monday (September 9) in Toronto, Canada.

Check in for your weekly fashion fix as Jill casts her fashionista’s eye
over the week in celebrity fashion, sharing what’s hot to wear… and
what NOT to wear!

Jill comes to us from STUNTgirls, for fun and fashion: www.stuntgirls.com.au 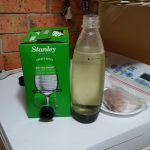