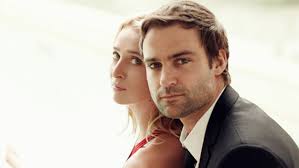 We all sat on the edge of our couches tonight to find out who would be killed off in Ten’s hit drama Offspring.

Would it be Patrick, Billie or Nina’s brother Jimmy.  I for one was not expecting Patrick.  Bad luck for me!

When Matthew Le Nevez signed up for Offspring, his growing profile in the US meant that his commitment to Offspring would “always be a minute-to-minute thing”, says Banks. “We had to lure him back. He’s been prolonging his time here. It’s not so much that his profile grew and he left. It’s more that we’ve been living on borrowed time throughout the whole process and we’re lucky we’ve had as much of him as we have.”

Consequently, an exit plan was always on the books.

Initially, Edwards, Banks, Keddie and Matthew Le Nevez were the only ones privy to episode 12’s dramatic turning point, the penultimate episode in a season that has focused on Nina and Patrick sorting out their hitherto messy relationship after Nina discovers she is pregnant to Patrick.

Next week Nina will give birth to their baby and at the time the baby enters the world Patrick will slip away in her eyes.

“We’ve tried to go forward with stories that might be unconventional in a romantic comedy story. For example, going ahead with the pregnancy, normally that wouldn’t happen in a rom-com. We deliberately wanted to go into new territory, just go where the characters would take us. The issue of mortality was new and we thought we should do it.”

Nor did they exploit the tragedy as a cliffhanger. “We did debate a lot when we’d do it in the series,” says Banks, “and we decided that, firstly, we wanted to settle the relationship and, secondly, we wanted it to be before the birth, not after the birth, partly because in character terms we wanted Nina to have something … we wanted to end the season on a complicated but hopeful note.”