I wake up hearing MasterH waking up usually about 6/6.30am but with a 9 month old that can change into 5am quite easily. Daddymax being the wonderful hubby he is gets up while I continue to be lazy and lay in bed trying to sleep more. I usually don’t sleep. I toss and turn in and out of sleep and wake up thinking about all the things I need to do. 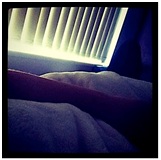 I usually get wake-up cuddles from all the kids. Which makes it even harder to get out of bed. But I do it. I get out of bed and depending on if the kids have had breakfast I get them breakfast (usually Weetbix. Daddy doesn’t make it like mummy). I get them dressed for the day. I take my heart tablets before I do anything else because I just know it will be lunch time before I remember if I don’t do it then.

The kids are usually begging me to put their shows on by the time daddy goes to work so I change to ABC2 reluctantly knowing there will be a hissy fit when I say enough TV. But I do it because it’s usually MasterH’s nap time. While MasterH is in bed asleep I unpack and repack the dishwasher and wash the bottles by hand. I put a load of washing on. Today I put a slow cooker on (it’s so much easier at dinner time if I do and they taste fantastic). Trying to keep the girls quiet is no easy task. They’re usually asking me for food. (They do that a lot). Once MasterH gets up from his nap we have cuddles on the lounge. Usually watch the kid’s shows together. Then we get up and play. They have so many toys to play with but unless they really want to play with them, most of the time they just want to hang around me. MissS usually tries to drag the chair over to the sink and play with cups and water. She would spend all day there if she could. I’m sure she wishes there was a chair that she could sit on instead of having to stand up 🙂 MissE is alot more stubborn. She wants to play with the only thing I say no she can’t play with. 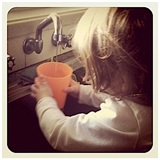 It’s sandwiches for lunch. Usually salad, Vegemite or sprinkles. Sometimes if they’re lucky they get noodles for lunch. Boy do they love their noodles. Then it’s a quick tidy before MissS has her nap. (If she has her nap). Depending on how MasterH is, I put him back down for a nap after MissS is already asleep. Most days I get 30mins/1hr of “quiet time” usually to occupy MissE. She never has naps anymore, except when she falls asleep on the lounge. It usually involves colouring in or reading. Sometimes we get down some of the toys she misses out on playing with because the little kids can’t get them.

Once the kids wake up from their nap it is what I like to call the devil hours lol Some days they wake up great. Like today MissS was so excited to see me she ran to me with a huge smile on her face and gave me big cuddles and a kiss. MasterH usually wakes up and wants to cuddle. Then I give him his lunch.

Today I took them outside and we spent the rest of the sunlight outside playing. It was a beautiful day today. Much better than the freezing cold days we’ve been having so we had to make the most of it. The kids love going outside. You can see their little faces light up. I gave the chickens food and locked them up for the night. They played with the dogs. Jumped on the trampoline. Played on the swings. Dug holes (even though I told them not to). Then as the sun started to disappear, getting them to come inside is always the hardest part. But the devil hours weren’t so bad. I guess they were more occupied than usual. Once we were back inside I peeled the potatoes got them ready to start. Masterh was so tired (because he’s teething and doesn’t want to go to sleep) so I did the naughty thing and kept him in my arms. It didn’t take long and he was asleep. Naughty…maybe but sometimes its so nice just sitting there looking at him so incredibly peaceful. Once daddymax gets home its dinner, then one of us takes the kids in for a shower or bath while the other tidies up the dishes. Then its get them dressed. Have a play. Then time for bed. MissE is usually the last to go to bed. She likes having just time with me and daddymax just to cuddle on the lounge.

Of course this isn’t all the details of my day, I vacuum whenever I need to. At 9 months old Masterh will put anything in his mouth. The washing never ends, folding. Then there is the fighting. The yelling lol. But it would take forever to write all that stuff down.

So I guess the moral of the story. Being a mum isn’t easy. There are always so many things that need to be done. Kids to keep entertained. But I think it’s easy to get caught up in “woe is me.” I know that my day is stressful at times, demanding. But if I don’t make the most of these moments and realize that my kids aren’t always going to want to sleep in my arms or have me watch over them while they play, then they may pass by and it will be too late to get them back.

I whinge and bitch like any other mum and that is completely normal. But there are the good bits too right?!?!