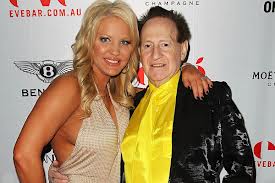 I’m sure this will come as no shock to some but the marriage between Brynne Edelsten and Geoffrey Edelsten has come to an end after 4 years of marriage.

Brynne’s publicist announed that the couple split 6 weeks ago and are currently negotiating settlement.

The 40 year age gap between the pair was always a talking point and recently Brynne shared her quest to have a family – something that had alluded the pair although trying for a year.

Geoffrey is now in the US where he has declared bankruptcy and Brynne has stayed in their Melbourne Penthouse.

She wishes to stay in Melbourne.

It is believed that Geoffrey’s indescretions with another US woman 18 months ago are to blame for the couple’s split after councelling was unable to repair the rift.