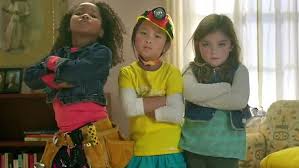 If you have a lazy three weeks, PLENTY of toys, great house insurance and three young girls aged six to eight, then you can create a whole lot of fun with a life changing message. That’s what GoldieBlox did with Reese (aged 6), Sabrina (aged 7) and Raven (aged 8), plus some cool dude named Brett and a pretty patient film crew.

Girls can do anything, we all know that. Over 35 years ago an advertising campaign promoting non-traditional employment for young women was being played out in New Zealand. The tagline was ‘Girls Can Do Anything’, and so they can. Fast forward to 2013 and we STILL have to promote the fact that girls can do anything.

This past campaign was brought to mind today when I saw an on-line advertisement encouraging independent thought, creativity, and construction skills for girls.

GoldieBlox is a toy company that has a charter to show the world that girls deserve more choices than dolls and princesses. Founded by a former Stanford engineer, Debbie Sterling, GoldieBlox develops interactive book & construction sets starring Goldie, a kid inventor who loves to build.

However, GoldieBlox have gone a whole step further with their advertising campaign whereby three eight-year old girls, Raven, Sabrina & Reese, are bored with princesses in pink and seek to construct something awesome! And by awesome I mean a magical contraption made from household items that would put Heath Robinson to shame.

William Heath Robinson was a 20th Century English cartoonist and illustrator, best known for drawings of eccentric machines. In the UK, the term “Heath Robinson” has entered the language as a description of any unnecessarily complex and implausible contraption, similar to “Rube Goldberg” in the U.S; the inspiration for this GoldieBlox campaign.

Showcasing the amazing and inventive powers of young girls, this inspiring campaign questions the choices we may consciously or unconsciously make. Let’s not make judgements about the apparent lack of parental supervision or the baby hanging in a basket in the doorway as part of this contraption. It’s suspension of disbelief. Instead, marvel at the strategic use of household items, the total freedom of expression, the empowering sound track, the magical quality of a child that doesn’t know they can’t do something. And, as it happens, girls can do anything.

you like to buy us pink toys
and everything else is for boys.
You can always get us dolls,
and we’ll grow up like neanderthals.
it’s time to change,
we deserve to see a range
cos all our toys look just the same
and we would like to use our brain!

As I write this I am aware that I am a total girlie girl. I love bling, stilettos, puppies and soft fabrics. I also love cars, gritty art and I ride a Harley. Why do we have to be boxed? I am a feminine female who is equally comfortable in a ball gown at a gala dinner or in leathers on a motorbike. When I was a young girl I loved dolls and Paris fashion magazines. I also loved playing with cars and building roads in the sand at the beach.

What choices do you make? Do you play the role of being feminine when you would rather bust out the chainsaw? How do your choices affect those around you? Does it matter?

Girls Can Do Anything! They can and they do. Organised chaos is the basis for any invention. Raven, Reese & Sabrina are not just actors in an ad; they are inventors. Each girl participated in the conception, design and construction of this ‘Heath Robinson’ marvel, and an eight year old girl sang the soundtrack which is a rewriting of a Beastie Boys song.

Enough! You want to see it right?

Here’s the link to reminding yourself and those around you that GIRLS CAN DO ANYTHING (and by ‘girls’ I mean YOU!)