A Brooklyn man was punched in the face as he was heading to a concert in Manhattan yesterday and the reason is beyond ridiculous. Mario Licato, 26 was attacked simply because he LOOKED like actor Shia Labeouf. Not because the attacker thought it was him, but simply because he looked so similar to the bad-boy actor.

Licato had just stepped off a train on the Lower East Side when the Shia-hating incident occurred.  “I didn’t even see it coming,” Licato said.
“All I saw was fists. I fell down the stairs and woke up covered in blood with my glasses broken in half. All I heard him say was, ‘This is because you look like ‘Shia LaBeouf!’ And then he ran away,” said Licato, who was left with a black eye and a three-inch cut on his nose.

Luckily for Licato a couple nearby who saw the attack called 911 and walked him up the subway stairs, where they waited for an ambulance to arrive.

It seems unbelievable that someone could hate an actor so much that even a reminder of him can set them off.
“I’ve been told a bunch of times that I look like him, but never got hit for it,” Licato said. “I guess people really don’t like his performance art.”
He added, “I wonder what Shia LaBeouf did to him. It must have been really bad. Maybe he didn’t like his last piece.” 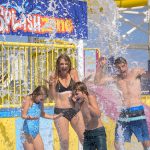