Last Thursday night Hubbster and I headed off to the big smoke for the evening to the Arts Centre to watch Shane Warne the Musical – with Eddie Perfect playing the lead role. Which got me thinking of an interesting question to pose to our dad bloggers on The Other Half.

If someone was to write the musical of your life to date which actor do you see playing you and why? What musical genre would best set the mood and who would play your significant other? It’s really easy for me to identify those who wouldn’t be playing the lead role of Bucky – for obvious reasons I can name Ryan Gosling, Arnold Schwarzenegger, Vern Troyer and Oprah Winfrey. Perhaps Mike Meyers would be the man but compared to Mike I’m only 1% funny, and .0001% as wealthy. I think I’ll settle with Jack Black. It’s true that I’m only 1% as funny as Jack and my bank balance would resemble half of what Jack carries in his wallet a typical day, but Jack can play the role of the chubby, dopey, daggy, naive, misfit really well.

As for the music, I’m finding it hard to decide out of slapstick comedy (think The Three Stooges), whatever category “The Young Ones” soundtrack would fit into, some laid back stoner anthem style (I’m thinking Daft Punk’s Da Funk), and children’s classics. Now I only mention the stoner thing because sometimes I can be so laid back that people think I’m stoned (for the record, I’m definitely not!). Seeing as I’ve been singing nursery rhymes for eight years straight, the musical genre has to be children’s music.

And as for the significant other…? Well, I can tell you who wouldn’t be playing this role – Ryan Gosling, Arnold Schwarzenegger, Vern Troyer and certainly not Mike Meyers! Come on, no one can play the role of my beautiful wife, but my beautiful wife herself. 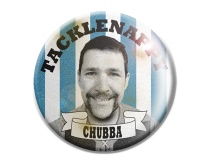 If my life was a musical I would hope it would be one of those old style all singing all dancing spectacular. I am an Oklahoma bloke more than a Mama-Mia snag. I prefer Sound of Music’s dialogue to Shane Warne the Musical ‘s although both do use naughty language. Yes even Sound of Music pushes the language barrier with the famous “What is it you can’t face?” line. If you don’t know what I am talking about look it up on you tube.

I wish my life was a musical. I love the fact that they just break out into song at every life event. In reality it would be a little bit of a 70’s rock opera. For example I would love to break out into a song and dance number in the delivery room at the birth of Kid X. It would go something like this: If I were ever deemed worthy of a musical, which quite frankly will only happen if I win the lottery and pay for it myself.. I see glitz, I see glamour, I see mediocrity and self harming coupled with binge drinking and a range of fast cars to set the the heart rate alight.

It would be a cross between Grease, Cats and Edward Sissorhands. All combining to produce a concocted masterpiece of slick hairstyles and bald felines being driven around at high speed. With Jim Carey as the lead playing his ‘The Mask’ character Stanley Ipkiss and Jessica Rabbitt as the lady in full cartoon glory. They would dance and sing their way through the musical slicing through cats ears at every opportunity with drunken encounters at every other turn.

Even as a junkie I stayed true [to vegetarianism] – ‘I shall have heroin, but I shan’t have a hamburger.’ What a sexy little paradox. ~ Russell Brand

When I was in my early teens and confused by a whole host of sex hormones, and falling desperately in love with every girl I met, and engaging in a frequency of self-pleasure that most psychological tomes would list as ‘Obsessive Compulsive’, I used to walk through some of the paddocks close to my home singing 80’s love ballads to the cows there.

Occasionally, I’d sit high on a haystack and sing melodramatically to the space in front of me, dreaming that I was part of the classic 80s group Airplay.

In those formative years the cattle were my audience and since then I have always had a deep love and connection with cows. When I eat steak – especially when it’s rare – I find myself humming along to the dulcet tunes of “All Out Of Love” and feeling a kind of amorousness that many would label as ‘inappropriate’ in terms of its interspecies focus.

So, to answer the question… in a musical about my life I would like Russell Brand to play me, because he’s a vegetarian and so must love cows with a passion that’s comparable to mine

I would choose 80s love ballads as the musical genre because they’re melodramatic and emotionally engaging, just like me.

To play my significant other I would choose ‘The cow That Jumped Over The Moon’ because she is awesome in her vision, and has a sense of adventure that reminds me very much of the love of my life – Reservoir Mum.

So tell us…who would you to play you in the musical of your life?