Home>Lifestyle>Latest News>Would You Have a Hair Transplant on Your Bikini Line?

Would You Have a Hair Transplant on Your Bikini Line?

I don’t know many women under 50 that haven’t at one point braved the Brazilian wax, whether it was just out of curiosity to see what all the fuss was about, because they desperately wanted the ‘smooth’ look or because they caved in to pressure from society’s belief that having no pubic hair is somehow seen to be cleaner, more hygienic and well, just looks better (even though you resemble a 10 year old).

And if you haven’t done it yet? Well, you better hold your horses because it seems like with every changing fashion trend, women are wanting the natural look back again thanks to celebrities like Gwyneth Paltrow, Cameron Diaz and Lady Gaga who all embrace full growth down below.

As written about here, DHI Global, a hair restoration clinic in London has seen more female patients than ever – with a record number of 22 seen, last month who want their bits covered with fuzz once more.

They say that as a result of long-term waxing and/or laser hair removal, women have suffered damaged follicles (wasn’t that the point) resulting in patchy growth and now scores are undergoing body hair restoration to restore their natural state. This involves removing hair from the back of their heads, re-implanting it into their bikini lines and then waiting for the healing process (a month before you can have sex again) to take place. 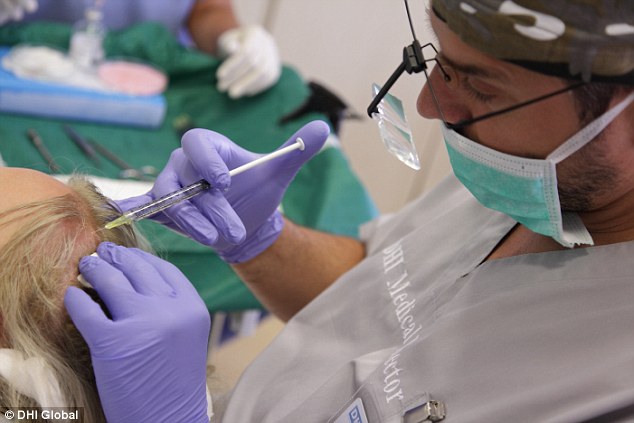 ‘I spent years cultivating the smooth look and, for a long time during the Baywatch era of the 90s, I loved it. I was young and indulging in passionate relationships with men, so always wanted to look my best down below.

‘Much of my grooming regime involved waxing in salons, but that was expensive, so I later tried cost-effective DIY strips which seemed harmless.

‘But, after several years, I gradually stopped. I got into a serious relationship and later married, then – after the birth of my son – I saw my body in a different way. I didn’t want to groom as much, especially as my husband agreed that he preferred the natural look. 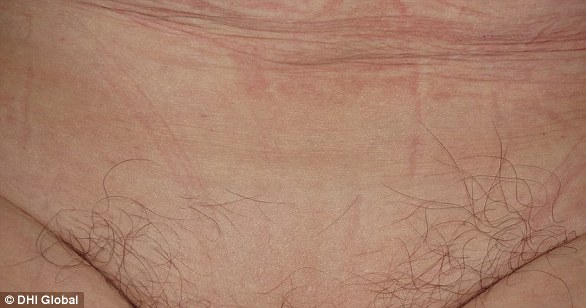 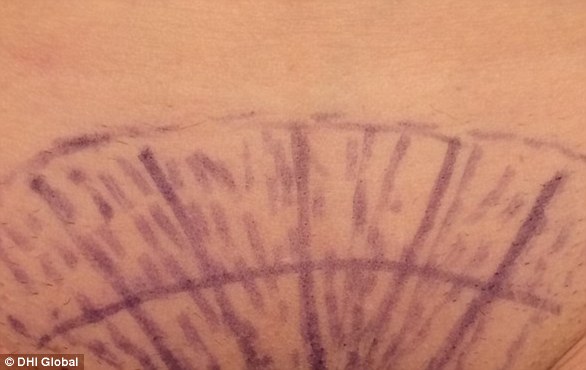 Planning: The clinicial maps-out the areas which need densifying with the new hair

‘However, when I tried to grow my pubic hair back I noticed that it was patchy. There were noticeable areas which were bald and, although my husband didn’t care, I was embarrassed. I became self-conscious. Probably in a similar way to other women do when the hair on their head thins, but this seemed worse because I’d caused it. It was self-inflicted.

‘Panicked, I spent a lot of money on lotions and potions which didn’t work. Then, last year, I found out about the possibility of a hair transplant. At first it sounded excessive. Something only men would do, but a friend who’d over-plucked her eyebrows had them restored at DHI London and suggested I contact them, so I went for a consultation.

‘They explained that they could take hair from the back of my head and re-implant it into my bikini line without any real discomfort. Best of all, there wouldn’t be any scarring and the results would be permanent – the hair would never fall out again. 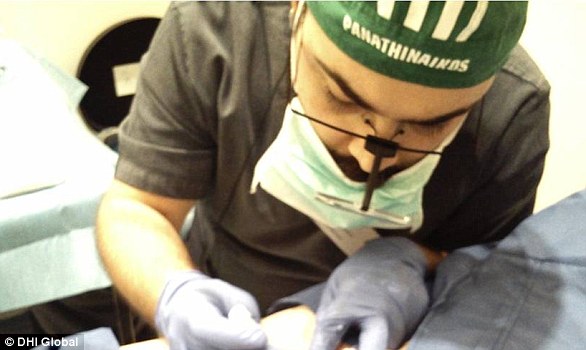 Painstaking, but almost painless: Monica said the procedure was not uncomfortable 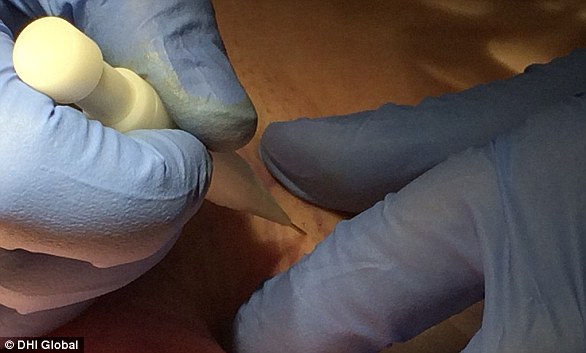 Implantation: A surgeon used a specially-designed tool to insert the follicles

‘Within two weeks I was booked in and underwent the procedure at their New Cavendish Street site.

‘First, I had to lay on my stomach for an hour as they took the hair from the back of my head, which felt no worse than being prodded with a biro.

‘Then, they flipped me over and re-implanted the follicles into my bikini line using a special implanter tool which looks like an apple corer. This was painless because I had local anaesthetic. 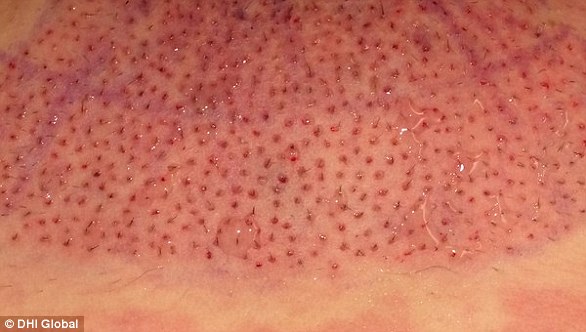 Surgery complete: The procedure took just over two hours and this images shows the freshly-implanted follicles 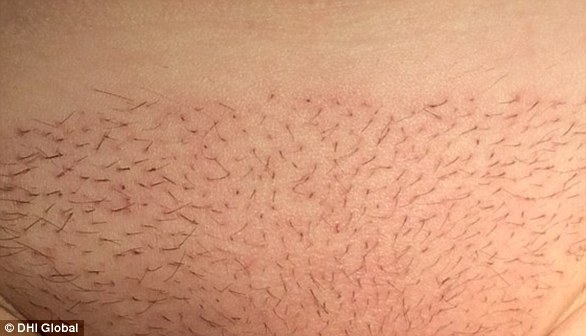 The start of growth: The hairs are beginning the sprout after the initial healing period

‘Then, 90 minutes later, I was ready to go home. The staff gave me an aftercare package, which meant I had to keep the area wet with saline for a few days, then it scabbed over, which is a natural part of the healing process.

‘Once this cleared I was able to shower as normal and, a month later, could start enjoying have sex again.

At first we took it easy because we didn’t want to damage the follicles, but now – five months on – I can be as passionate as usual.

‘I feel like a whole woman again. The natural look is definitely back – and, for me, it’s here to stay.’ 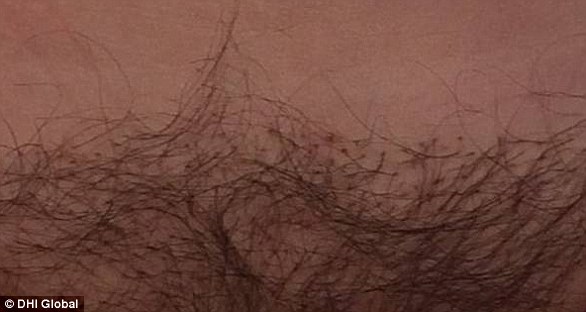 Explaining the process, DHI’s Founder Kostas Giotis said: “The doctor thoroughly designs the recipient area according to the needs of the patient.  The number of required hairs and the kind of follicle grafts required for a natural result and density are counted, then they are extracted from the donor area – which is usually the back of the head.

We use a custom designed implanting tool, which gives us complete control over the depth, angle and direction of the implanted hair, to achieve a nice and absolutely natural-looking result.

This is crucially important, especially for the pubic area because pubic hair tends to be heavier, longer and coarser than the hair on our heads. But the finished result looks almost identical to the real thing.

The follicles are then placed into the body area that needs to be covered and will grow for a lifetime. It’s a very simple procedure and can sometimes be completed within two hours.”

I can’t help but wonder though, if it’s hair taken from your head – is it going to behave like pubic hair and stop growing after a certain length or keep going? What if you have straight hair – is it going to just hang down all lank and limp?? Why do we spend so much time worrying about stuff men don’t even care about?!

Bellabox Is The Beauty Subsciption Service We All Need Right Now!