Are Honey Birdette’s Posters Too Raunchy to be in Shopping Centre Displays?

It’s not the first time Honey Birdette has been in trouble and….it probably won’t be the last. According to this story on news.com.au this image from their latest campaign has been banned from their store window displays.
If you’ve been living under a rock for the past ten years, Honey Birdette is an upmarket lingerie store that is a little edgier than what you would find in Bras ‘n Things or Myer. Venturing inside you will discover expensive, quality pieces mostly in white, red and black and a full collection of adult toys discreetly displayed at the back.

And for nearly ten years now, owner and creator Eloise Monaghan has been battling complaints about her images which feature women’s breasts that have been deemed just too raunchy.

The featured image has been banned by the Australian Ad Standards Bureau for breaching Section 2.4 of the Code which states that  “Advertising or Marketing Communications shall treat sex, sexuality and nudity with sensitivity to the relevant audience”.

The campaign consists of 7 different photos that appear in their range of stores across Australia but this particular one has been banned as it exposes minors to “inappropriate marketing” by using “highly sexual images”.

The problem, once again, is the humble nipple. It seems you can show men’s nipples, but heaven forbid we show a woman’s nipple. 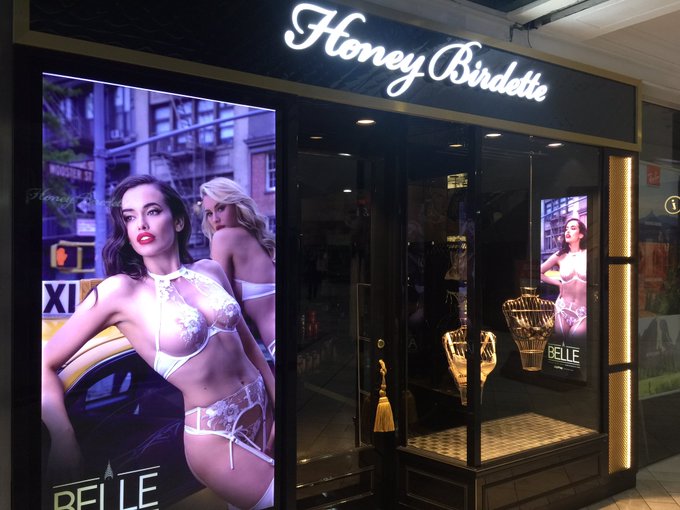 Monaghan is exasperated and feels it is ridiculous. “Are they standing there with a magnifying glass looking for the nipple?” she said in an interview with news.com.au.

She went on to say “it’s a small group of ‘Christian fundamentalists’ who have an issue with the campaigns.

It’s this same group from Adelaide … they’ve vandalised our stores and abused our girls [who work in the store].

They hired a space [that is available for busking] outside the Adelaide store to protest recently”. In 2015 an ad which showed Santa alongside a lingerie-clad model also had to be banned after complaints.

Website Collective Shout is host to a few rants from parents including this mother of a four year old:

“I have to go towards it and past it to get to the Kmart, essentially. Their current campaign is for white lacy teddies/negligees and in the full-size posters, there are nipples clearly visible. I feel like this is wholly inappropriate for a public shopping centre, they’d never be able to use those images in prime time to advertise, so why do I have to subject my young son to that imagery when all I wanted was to go get him some new shoes for preschool?”

and from a father:

“At first, I was sad that my kids were exposed to these images so young, but I think I’m just angry now that I have been forced to discuss some very adult themes with them way before their time and this company has complete disregard to what they force the public to see!”

“We’re entering a particularly conservative time where girls are being made to cover up and it’s not okay.”

“It feels like we take a step forward, then we take two steps back.

“There are plenty more issues out there that are worth fighting for … we should be making more progress than this in 2017”.

Sounds like a storm in a B-Cup to me.

Previous Article This Nanny Ad Is So Extreme That Even Mary Poppins Doesn't Have the Necessary Qualifications!
Next Article Say HelloTo The Next Big Beauty Trend...Wavy Brows!